Safdie Architects have shared their design for ORCA Toronto, a proposed mixed-use development in Downtown Toronto that weaves together surrounding neighborhoods with the creation of a vibrant publicly accessible park. By decking over the 100m-wide, 800m-long rail corridor leading to Union Station, the project reclaims a prime 16.5-acre (6.5-hectare) site just west of the CN Tower. Of the 16.5 acres, 10.5 acres (4.5 hectares) are available for an urban park, while 6 acres (2 hectares) feature residential, office, hotel, retail, and transit facilities. Reconnecting the downtown area to the city’s waterfront, the new neighborhood promises to become a vital community, animated by both the park and integrated retail development, for this underutilized part of the city.

The design features an innovative configuration of slender residential towers connected by elevated bridges which accommodate housing units, gardens, and recreational facilities, thus maximizing the permeability of the project and the park area. Safdie Architects pioneered the concept of bridging between towers as a means of creating special public and community amenities. In contrast to individual apartment buildings, the linked residential towers offer connection as well as shared indoor and outdoor amenities at multiple levels to encourage interaction among residents and foster a sense of community.

“As the city has expanded westward, the railway lands have increasingly become a brutal barrier between the King West Community and the growing waterfront district,” said Moshe Safdie. “Our design aspires to forge a reconnection in the community fabric by creating a lively park that is economically viable and promises a unique destination experience for Toronto. As an isolated park is unlikely to generate the diversity of activity required to animate the neighborhood, our design integrates amenities for city life like shops, restaurants, and offices into the park itself, drawing in residents and visitors alike.”

Taking advantage of the elevation and contours necessitated by building above the rail corridor, the design activates 65% of the site’s area through a multilevel park. Envisioned to draw people of various ages, the park features open lawns, playgrounds, walking trails and bike paths accessible by ramps, escalators, and elevators interwoven throughout the development. Safdie Architects designed the park in collaboration with PWP Landscape Architecture, whose work includes popular multilevel parks such as San Francisco’s Salesforce Park, a 5.4-acre (2.2-hectare) terraced public park spanning over a major transit center, and Sydney’s Barangaroo Headland Park.

At ORCA Toronto, shops, restaurants, and cafés are directly connected with the park’s outdoor areas on several levels, attracting visitors into and through the park. The retail galleria is designed to be opened to the park in good weather and enclosed during the winter months to encourage year-round use and vitality. Oriented towards leisure, entertainment, and recreation, it complements and seamlessly integrates with the park. Additionally, it provides continuous retail activity along Front Street, assuring the animation and vibrancy of the street. To enhance connectivity of the park with the surrounding neighborhoods, direct access for pedestrians and bicyclists has been provided on all North-South cross streets, allowing free movement from the surrounding streets to the park without requiring entrance through the retail galleria.

“The project introduces a new generation of retail, beyond the traditional interior shopping mall; one in which nature and the marketplace are integrated to create an enhanced, singular experience,” said Moshe Safdie.

Developed in collaboration with Arup Engineering, the project incorporates nine towers in total, including a corner office tower and eight residential towers with approximately 3,000 units of housing. The profile of the towers and their offset alignment preserves a sense of openness and porosity, while maximizing sunlight and views for residents. Collectively, the towers and the bridges between them, frame dynamic views of Toronto’s skyline as one moves around the site.

“This project is a study in balance and integration: between open space and density, landscape and building, private development and public interest,” said Sean Scensor, Partner and lead architect on the project for Safdie Architects. “A great public park will only be realized by combining the resources of the public and private sector, not only to solve the challenge of decking over the active rail corridor, but also to ensure the park’s quality and maintenance into the future.”

Led by CRAFT Development Corporation, Kingsmen Group Inc., and Fengate Asset Management, the project is under public review in dialogue with the city of Toronto. 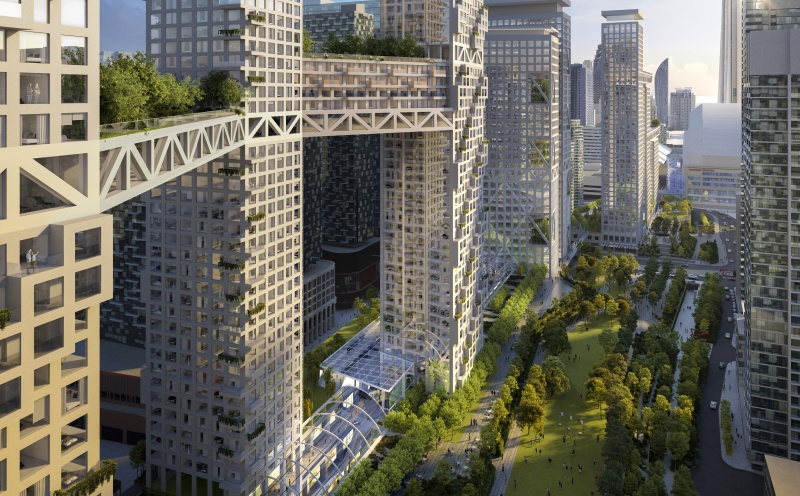