Sharjah Art Foundation announced today the recipients of the first Short Film Production Grant, a part of Sharjah Film Platform (SFP). Emerging filmmakers Faisal Attrache, Mohammed Al Hammadi and Abdulrahman Al Madani will be awarded a total of USD 30,000 to support the production of new work. The foundation also announced today an open call for film submissions that would be screened alongside the premieres of the Short Film Production Grant recipients’ new works at the annual Sharjah Film Platform in December 2018.

The Short Film Production Grants and curated film programme are part of the foundation’s newly established SFP. Launched in 2018, SFP is a critical resource for filmmaking in the United Arab Emirates and the surrounding region. SFP additionally includes workshops and discussions and builds upon the foundation’s long history of film programming and commissions. SFP continues and expands the foundation’s commitment to artists, including emerging and established filmmakers, film producers, critics and students.

‘For more than two decades, we have supported and collaborated with emerging artists and filmmakers through commissions, screenings and other programmes, first through the Sharjah Biennial and then as part of Sharjah Art Foundation’s regular activities since 2009,’ said Hoor Al Qasimi, Director of Sharjah Art Foundation. ‘There is a dynamic community of artists in the United Arab Emirates and the surrounding regions, whose experimental work has made an important contribution to the broader cultural landscape. We are thrilled to announce Attrache, Al Hammadi and Al Madani as the first recipients of SFP Film Production Grants. We are also pleased to announce an additional open call for the first curated film programme and a series of sponsored awards that will be presented during the Sharjah Film Platform in December this year. We are excited for filmmakers to participate in the launch of Sharjah Film Platform as well as engage with the foundation’s work to educate and build community around this medium.’

The winners of the Short Film Production Grant were assessed on the creativity and technical skills demonstrated by their proposal submissions.  The socially driven work of the selected artists confronts personal experiences related to a sense of belonging, identity, nationhood and broader social topics, including the refugee crises, bullying and terminal illness.

In conjunction with the announcement of the Short Film Production Grant recipients, the foundation also announced an open call for the first edition of the annual SFP curated film programme, running this year from 11 to 22 December 2018. Curated by Al Qasimi, this programme will feature talks, workshops and masterclasses as well as film screenings, including the premieres of the films awarded the Short Film Production Grant. The Sharjah Film Platform will also present three sponsored awards to selected filmmakers.

Filmmakers interested in having their work screened in SFP’s curated film programme are invited to submit feature films, experimental films or short films by 1 September 2018. All artistic approaches, formats and themes will be accepted, and all open call submissions will be considered for a jury prize.

To learn more and apply to the open call, visit sharjahart.org.

Faisal Attrache is a writer, director and producer who strives to tell unique stories with a socially conscious message. His short docu-fiction film Forever, Comandante (2016), made in Cuba under the tutelage of Abbas Kiarostami, won a Mention Spéciale du Jury at the Clermont-Ferrand International Short Film Festival, France (2018).  His short documentary Growing Home (2014) had its international premiere at the Sheffield DocFest, UK (2015) and was awarded Best Documentary Short Film at the Newport Beach Film Festival, US (2015).  He received an MFA in Film Production from the USC School of Cinematic Arts, Los Angeles (2014).  Born in Swaida, Syria in 1988, Attrache grew up in the San Francisco Bay Area and is currently based in Berlin.

Mohammed Al Hammadi is an Emirati filmmaker with a background in directing, writing, acting and producing.  He participated in theatre courses at the Sharjah Art Institute (2013–2014) and made his cinematic acting debut in the feature film Abdulla in 2015. He then travelled to Los Angeles to develop his filmmaking skills further at the New York Film Academy (2015–2016).  After his return to the UAE, he wrote, directed and produced his sci-fi film The Remaining Time, which had its world premiere in the Muhr Emirati category at the 2017 Dubai International Film Festival.  He is currently acting in the feature film Musk, scheduled for release in UAE cinemas at the end of 2018. Al Hammadi was born in 1989 in Dubai, where he lives and works.

Abdulrahman Al Madani started making films in 2012, focusing particularly on social issues.  His first documentary short, The Gamboo3a Revolution (2012), won awards from the Gulf Film Festival and the Abu Dhabi Film Festival, and he also directed the two short films Guilt (2013) and Nagafa (2014).  He received a bachelor's degree in applied media studies from the Higher Colleges of Technology, Dubai (2014) and completed a one-year filmmaking diploma programme at the New York Film Academy Abu Dhabi (2015).  His thesis film, Beshkara, received its world premiere at the Dubai International Film Festival the same year.  Al Madani was born in 1992 in Dubai, where he currently lives and works.

Sharjah Art Foundation is an advocate, catalyst and producer of contemporary art within the Emirate of Sharjah and the surrounding region, in dialogue with the international arts community. Under the leadership of founder Hoor Al Qasimi, a curator and artist, the foundation advances an experimental and wide-ranging programmatic model that supports the production and presentation of contemporary art, preserves and celebrates the distinct culture of the region and encourages a shared understanding of the transformational role of art. The foundation’s core initiatives include the long-running Sharjah Biennial, featuring contemporary artists from around the world; the annual March Meeting, a convening of international arts professionals and artists; grants and residencies for artists, curators and cultural producers; ambitious and experimental commissions and a range of travelling exhibitions and scholarly publications.

Established in 2009 to expand programmes beyond the Sharjah Biennial, which launched in 1993, the foundation is a critical resource for artists and cultural organisations in the Gulf and a conduit for local, regional and international developments in contemporary art. The foundation’s deep commitment to developing and sustaining the cultural life and heritage of Sharjah is reflected through year-round exhibitions, performances, screenings and educational programmes in the city of Sharjah and across the Emirate, often hosted in historic buildings that have been repurposed as cultural and community centres. A growing collection reflects the foundation’s support of contemporary artists in the realisation of new work and its recognition of the contributions made by pioneering modern artists from the region and around the world.

Sharjah Art Foundation is a legally independent public body established by Emiri Decree and supported by government funding, grants from national and international nonprofits and cultural organisations, corporate sponsors and individual patrons. All events are free and open to the public.

Sharjah is the third largest of the seven United Arab Emirates and the only one bridging the Arabian Gulf and the Gulf of Oman. Reflecting the deep commitment to the arts, architectural preservation and cultural education embraced by its ruler, Sheikh Dr Sultan bin Mohammad Al Qasimi. Sharjah is home to more than 20 museums and has long been known as the cultural hub of the United Arab Emirates. In 1998, it was named UNESCO's 'Arab Capital of Culture' and has been designated the UNESCO ‘World Book Capital’ for the year 2019. 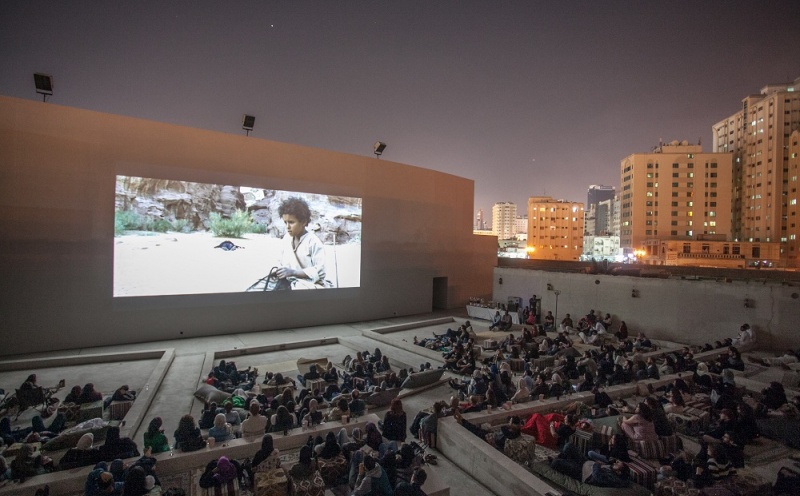