‘Sharjah Art Foundation’s spring exhibitions spotlight five artists from across our region who have made pioneering contributions to contemporary art and whose practices address a broad range of timely concerns,’ said Hoor Al Qasimi, Director of Sharjah Art Foundation. ‘Through these solo presentations, we aim to provide new insights on their practices and on the issues that have influenced contemporary art practitioners for decades. With the March Meeting presented concurrently this spring, we look forward to welcoming local and international visitors, artists and cultural producers alike to reflect on the transformational role of art and its influence on today’s most pressing issues.’

MM 2018 and all exhibitions are free and open to the public.

The 11th edition of March Meeting, Active Forms, explores issues of resistance through consideration of organising as a primary act and condition for artistic and cultural production. Presentations, panels, performances and conversations will examine how practices in art, writing, film, music and architecture impact engagement with instances of resistance and encourage a reassessment of art’s relationship to notions of authorship, agency and the public.

In addition to a programme of talks and panel discussions, MM 2018 will include Wael Shawky’s performance The Song of Roland: The Arabic Version (2017)—co-commissioned by the foundation—which debuted internationally in 2017, and two performances by composer and musician Neo Muyanga.

More information on the MM 2018 programme, participants and registration is available at this link.

Mona Saudi (b. 1945, Amman, Jordan) is widely recognised for her stone sculptures that explore the relationship between natural material and modern form. Spanning five decades of the artist’s work, Poetry and Form will provide rare insight into the evolution of Saudi’s aesthetic and intellectual trajectory. With materials sourced from the surrounding Middle Eastern region, her sculptures incorporate many different types and colours of stone, including white and green marbles, pink limestone and black diorite, while her works on paper draw inspiration from Arabic poetry. Through a large selection of her stone sculptures, paintings, drawings and works on paper inspired by the Palestinian poet Mahmoud Darwish and Syrian poet Adonis, the exhibition will cultivate a nuanced understanding of Saudi’s approach to notions of growth, fertility and the body.

Latif Al Ani (b. 1932, Baghdad, Iraq) was one of the first photographers to capture cosmopolitan life in Iraq from the 1950s through the 1970s. His photographs represent a unique visual record of the country’s complex culture, politics and industry during a period in which everyday life was increasingly influenced by urbanisation.

Spanning these three pivotal decades of Al Ani’s photography, Through the Lens 1953–1979 traces the progression of his life both in Iraq and throughout his travels. The exhibition includes photographs taken while Al Ani worked for the Arabic-language magazine Ahl al-Naft [People of Oil], part of the photography unit in the Iraq Petroleum Company (IPC), and during the period he served as head of the photography department at the Iraq Ministry of Culture and head of the Iraqi News Agency.

The artist’s first major retrospective to date, the exhibition spans over four decades of Boghiguian’s practice. The presentation will focus on the multimedia installations The Salt Traders (2015), A Play to Play (2013) and Unfinished Symphony (2011–2012); the drawing series Cavafy (1995–2017); a large selection of illustrated notebooks (1981–present) and a recreation of the artist’s studio in Cairo.

The exhibition was originally on view this autumn at Castello di Rivoli Museo d’Arte Contemporanea, where it was curated by Carolyn Christov-Bakargiev and Marianna Vecellio. The Sharjah presentation of this travelling exhibition is co-curated by Al Qasimi and Christov-Bakargiev and is organised by Castello di Rivoli Museo d’Arte Contemporanea, Rivoli-Torino in conjunction with Sharjah Art Foundation.

Mohammed Ahmed Ibrahim (b. 1962, Khorfakkan, UAE) has been a principal contributor to the development of contemporary art in the UAE. Best-known for his explorations into land art, he has been inspired by his lifelong relationship with the environment of Khorfakkan, a town in the United Arab Emirates that is surrounded by the Gulf of Oman on one side and the Hajar Mountains on the other. His work often utilises organic material or form and explores an interest in the relationship between nature and urban development.

Through paintings, drawings, sculptures, installations and documentation, the exhibition will trace the development of Ibrahim’s practice and its enduring influence on contemporary art in the UAE.

Zineb Sedira (b. 1963, Paris, France) is recognised internationally for her explorations of family, tradition, oral history, migration and the intergenerational transmission of knowledge. Although these concerns have recently come to wider public attention, they have long been the focus of Sedira’s work in video, photography, sculpture and installation.

Air Affairs and Maritime NonSense will include Sedira’s best-known works, such as Image Keepers (2010), The End of the Road (2010) and Saphir (2006), as well as Mother Tongue (2002), which portrays the struggle to find a common language among three generations of women raised in Algeria, France and the United Kingdom. Three new commissions, titled Sunken Stories, Air Affairs and Laughter in Hell, will engage geopolitical histories of the recent past. 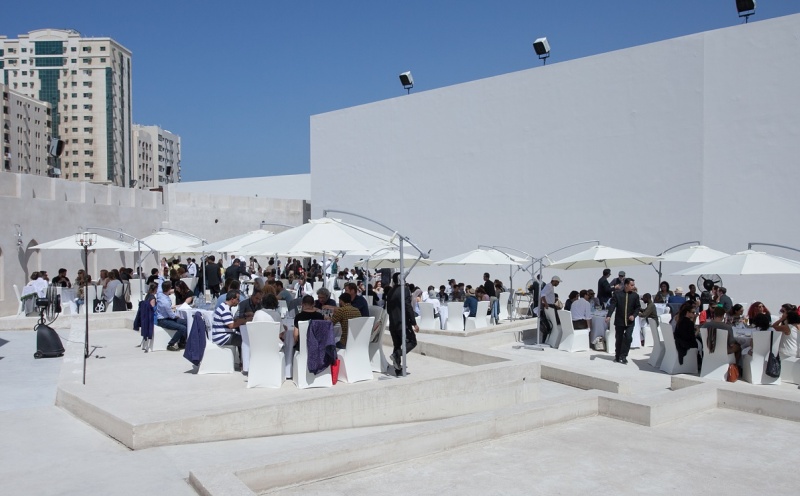