The 16 new members of the Association represent a spectrum of specializations, genres, mediums, perspectives, and programmatic approaches. To ensure that new members share the ADAA’s commitment to industry best practices and advancing the industry, candidates participate in a year-long application process, beginning with a nomination by an existing ADAA member. The entire membership votes to accept new candidates, who must demonstrate a record of accomplishment and major contributions to the art community, through activities such as organizing exhibitions, producing scholarly publications, and actively working with museums. They must additionally have been in business for at least five years.

“Our incredibly wide-ranging new membership class speaks to the vitality and breadth of perspectives and expertise defining the American gallery landscape today. From coast to coast, and with footprints around the globe, these 16 members have made demonstrated contributions to our industry—empowering artistic practice, fostering scholarship, and innovating with their business models. In welcoming the class of 2021, the ADAA continues to strengthen its representation of the leading American galleries and deepens the impact of our advocacy for our industry as a whole,” said Anthony Meier, ADAA President.

Andrea Crane Fine Art is a private art dealership based in New York City, working with collectors and institutions in the United States and globally. Areas of expertise range from Impressionism to modern, post-war, and contemporary art. For over seven years, she has worked as an advisor to painter Cecily Brown. As both dealer and artist advisor, Andrea has been instrumental in placing works in the Brooklyn Museum; the National Gallery in Washington, D.C.; the Art Institute of Chicago; the Cleveland Museum of Art; and a number of European institutions. The firm also works closely with foundations and estates.

DOCUMENT specializes in contemporary photography, film, and media-based art and actively promotes work by emerging national and international artists. The gallery has organized more than 60 solo exhibitions since its opening in 2012, and has since expanded its programming to include the representation of historical artists, cultivating a dialogue between emerging artists and established figures.

Jenkins Johnson Gallery was founded in San Francisco in 1996. The gallery represents international contemporary artists working across a multitude of disciplines, and exhibits the works of 20th century masters including Jae and Wadsworth Jarrell, Ming Smith, Aubrey Williams, and Gordon Parks. Its program also includes established, mid-career, and emerging artists, such as Lisa Corinne Davis, Aïda Muluneh, Enrico Riley, and Philemona Williamson. Jenkins Johnson strives to create space for underrepresented artists, curators, and thinkers, and has emerged as a hub for critically acclaimed curators and artists of color, building the careers of these artists through museum and private acquisitions, critical reviews, international art fairs, and exhibitions. In 2017, the gallery opened Jenkins Johnson Projects in Brooklyn, and hosts “Conversations on Culture” with artists, collectors, and writers on current art world topics. The gallery’s principal, Karen Jenkins-Johnson, is recognized as part of an influential group of Black American gallerists. She has been named a 2021 ARTnews Decider, a 2020 Artnet Innovator, and one of the Observer Arts Power 50.

Founded in 2011 by Brendan Dugan and currently located in New York’s East Village, Karma represents a diverse roster of multi-generational artists. The gallery hosts twenty exhibitions each year, many of which are accompanied by Karma-published monographs and artist books. In 2018, Karma opened its standalone bookstore that presents artist books and rare ephemera alongside the gallery’s publications. Works by the gallery’s artists are featured in numerous public collections including the Metropolitan Museum of Art, New York; Smithsonian American Art Museum, Washington, D.C.; Stedelijk Museum, Amsterdam; and Hammer Museum, Los Angeles, among others. In addition to its two gallery spaces, Karma’s third location is set to be completed in the summer 2021.

kurimanzutto was first conceived in the late 1990s by José Kuri and Mónica Manzutto as a nomadic gallery, adapting its form to the spaces needed for specific projects. In the absence of spaces dedicated to contemporary art in Mexico and institutional support for young Mexican artists, the concept aimed to create a support structure for emerging artists to establish their careers within Mexico as well as abroad. The gallery's New York program presents a series of dynamic rotating exhibitions each year.

Established in 1967, Lisson Gallery is one of the longest-running contemporary art galleries, having pioneered the early careers of important Minimal and Conceptual artists, such as Art & Language, Carl Andre, Daniel Buren, Donald Judd, John Latham, Sol LeWitt, Richard Long, and Robert Ryman, among many others. Today the gallery, which has five spaces globally, including two locations in New York as well as a temporary space in East Hampton since 2020, continues to work with many of these artists and has expanded its scope to support and promote the work of more than 60 international artists, spanning from Carmen Herrera to the estates of Antonio Calderara, Roy Colmer, Hélio Oiticica, and Leon Polk Smith. The gallery also introduced significant sculptors such as Tony Cragg, Richard Deacon, Anish Kapoor, Shirazeh Houshiary, and Julian Opie to the public for the first time. Since 2000, the gallery has represented leading international artists such as Marina Abramović, Ai Weiwei, John Akomfrah, Susan Hiller, Tatsuo Miyajima, and Sean Scully. It has also raised the profile of a younger generation of artists led by Cory Arcangel, Nathalie Djurberg & Hans Berg, Ryan Gander, Hugh Hayden, Haroon Mirza, Laure Prouvost, Pedro Reyes, and Wael Shawky.

Robert Mann Gallery represents a prominent group of contemporary photographic artists, including Julie Blackmon, Cig Harvey, Michael Kenna, Maroesjka Lavigne, and Murray Fredericks, as well as a strong collection of twentieth century masters such as Ansel Adams, ringl+pit, and Aaron Siskind, and the Estates of Ellen Auerbach, Joe Deal, Chip Hooper, and David Vestal. Founded in 1985, its program explores the function of the photographic medium and celebrates its unique history.

Jonathan Novak Contemporary Art has been an important source for post-war and contemporary American and European art since 1978 and opened its current location in 2000. The gallery works with paintings, drawings, sculpture, and prints by established artists from significant post-war movements including Abstract Expressionism, Color Field, Minimalism, Pop Art, and Photorealism.

Established by Julia Fischbach and Emanuel Aguilar in 2015, PATRON is founded on the defining characteristics of a patron of the arts, a person chosen, named, or honored as a special guardian, protector, or supporter. With this framework, the gallery aims to open new avenues for audiences of patrons from all walks of life to access and engage with contemporary art. With a national and international roster of artists including Jennie C. Jones, Bethany Collins, Kaveri Raina, Lucas Simões, Harold Mendez, and Caroline Kent, the gallery particularly seeks to foster the careers of women artists and artists of color.

Nara Roesler is a contemporary art gallery that represents seminal Brazilian and international artists who emerged in the 1950s, as well as preeminent mid-career and emerging artists whose work intersects with these historical figures. Founded in 1989, the gallery has consistently fostered curatorial practice while aiming to uphold the utmost quality in art production. It presents a rigorous exhibitions program created in close collaboration with its artists; supports artists with projects mounted beyond the gallery space; implemented the Roesler Hotel program, an additional platform for curatorial projects; and expanded its New York presence with a spacious location in Chelsea that can accommodate major presentations of its artists’ work.

Dedicated to exhibiting groundbreaking modern and contemporary Art since the early 1980s, Sprüth Magers is known for its rigorously curatorial programmatic approach and enduring devotion to the artists it represents. Over the past three decades, the gallery has fostered close relationships with museums and curators worldwide while commissioning new scholarship and producing innovative publications, and now works with over 60 established, mid-career, and emerging artists and estates.

Founded in 2011, Cristin Tierney Gallery is a contemporary art gallery with an emphasis on conceptual, video, and performance art and a program showcasing artists engaging critical theory and art history. Central to the gallery’s mission is a deep commitment to the presentation, development, and support of both established and emerging artists, as well as audience education and enrichment.

With a focus on modern and contemporary art, TOTAH represents and mounts exhibitions of both emerging talent and established artists. Serving as a collaborative space and nexus for ideas, the gallery was founded by David Totah to foster creative freedom and bring the dialogue between the artist, their perception, and their work to receptive audiences. The gallery represents artists including Melissa McGill, Kenny Scharf, and TR Ericsson. 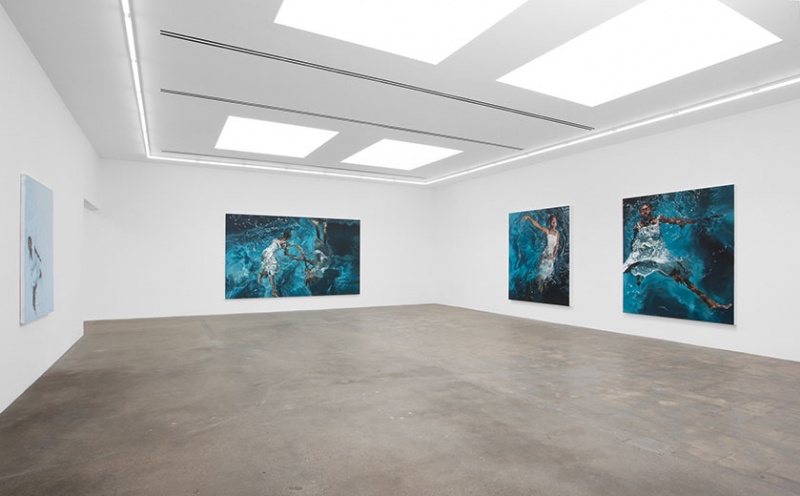