Designed to drive a community discussion on racism and social justice, the dramatic reenactment of King’s final sermon to be performed by Samira Wiley with a live gospel choir

Brooklyn Public Library and Theater of War Productions will present a dramatic reading and reenactment of Dr. Martin Luther King Jr.’s final sermon, The Drum Major Instinct on February 4, 2018, 50 years to the day that King originally delivered the speech, just two months before his assassination. The free performance, staged at the Central Library, will feature actor Samira Wiley reading King’s sermon, with a live gospel choir singing original and arranged music composed for the production. The dramatic staging will provide a starting point for a guided community discussion exploring themes of social justice and racial inequality.

In line with its mission to provide opportunities to engender civic engagement, Brooklyn Public Library has partnered with Theater of War Productions to co-produce this performance, designed to inspire a thoughtful community conversation on racism, social justice, economic disparity, and other issues addressed by King’s teachings and enduring legacy. DeAndrea Blaylock-Johnson, a choir member and a licensed social worker working in Ferguson, MO will facilitate this discussion alongside Artistic Director Bryan Doerries. Together they will encourage audience members to imagine a way forward by sharing their personal reflections on the sermon and how King’s words resonate with their own lives, particularly in light of the current national and global political climate.

“In The Drum Major Instinct, Dr. King prophetically imagined his own death and challenged his congregation, Americans, and the world to harness an inborn human desire ‘to be first’ and use it to promote justice, righteousness, and peace by channeling it into acts of service and love. Fifty years later, on this historic anniversary, Dr. King’s words resonate with new depth and meaning, empowering us to celebrate his vision, alongside the hard-won victories of the Civil Rights Movement, while interrogating the structures and systems still in place that have inhibited progress and sustained the oppression of countless communities,” said Bryan Doerries, artistic director of Theater of War Productions.

“We are proud to present Martin Luther King Jr.’s vision of a truly democratic society achieved through humility, love, and service to others—ideals at the heart of the Library’s mission,” said Linda E. Johnson, President and CEO of Brooklyn Public Library. “Decades later, Dr. King’s words are uncannily relevant and urgently needed.”

The historic performance will feature The Phil Woodmore Singers, a gospel choir that was initially assembled for Theater of War Productions’ Antigone in Ferguson, a project conceived in response to the 2014 murder of Michael Brown. Notable choir members include Michael Brown’s former teacher, Duane Foster, and Lt. Latricia Allen, commander of the Community Engagement Unit of the St Louis Metropolitan Police Department, a unit created to improve police and community relations in the aftermath of Brown’s death. Other choir members include educators, activists, police officers, and musicians from St. Louis, Missouri and Brooklyn.

Designed to instigate community conversations on issues that affect New Yorkers, this event is one of over 60 events Bryan Doerries and Theater of War Productions will stage in all five boroughs of New York City as part of Bryan’s appointment as a NYC Public Artist in Residence (PAIR) with the NYC Department of Veterans’ Services and Department of Cultural Affairs. The PAIR events are co-produced by Brooklyn Public Library and made possible by a generous grant from the Stavros Niarchos Foundation.

Admission is free but seating is limited. To register, visit www.bklynlibrary.org/bpl-presents

ABOUT THE DRUM MAJOR INSTINCT

Co-commissioned by BRIC, Theater of War Productions’ The Drum Major Instinct, premiered in Brooklyn in 2017. Drawing from Dr. Martin Luther King Jr.’s speech, which he delivered on February 4, 1968 at the Ebenezer Baptist Church in Atlanta, GA, the production combines a dramatic reading of the sermon with original live music performed by a gospel choir. In the premiere event, which featured Samira Wiley and NYC City Council Member Jumaane Williams, the performance culminated with a dynamic community conversation that addressed racism, gentrification, violence, and social justice. 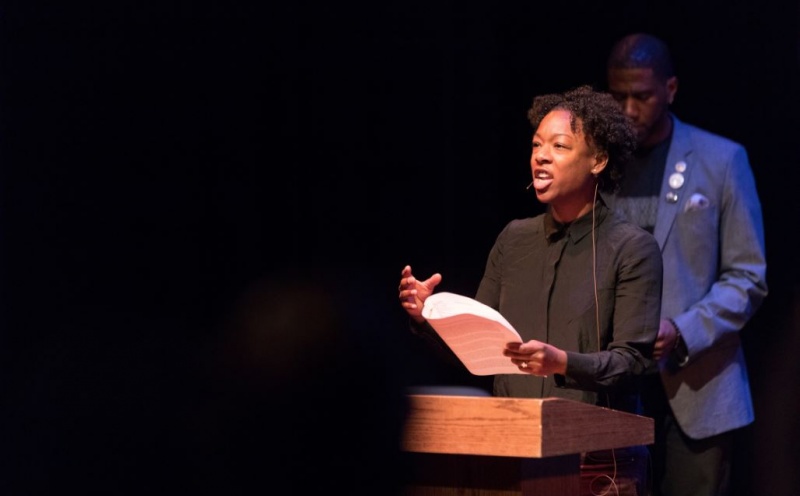