Highlights of the 2019 season through Spring include:

TBA21–Academy announced today its upcoming 2019 program through spring, including the opening of a new global center and resource for collaborative  oceanic research and discovery in Venice; international residencies and exploratory voyages throughout the Pacific; as well as interactive convenings and workshops around the globe with artists, thought-leaders, scientists, policy-makers, and experts, designed to drive cultural production, new research, and change in support of the oceans.

TBA21–Academy fosters a deeper understanding of the ocean, leveraging art to engender creative solutions to the most pressing issues facing the ocean today. The itinerant Academy is a non-profit, non-collecting organisation that commissions transdisciplinary research designed to build knowledge systems, inspire cultural production, and drive policy change. Its unique approach was instrumental in the development of its scientific arm, The Alligator Head Foundation, which manages the East Portland Fish Sanctuary in Jamaica.

The Academy’s 2019 season features the launch of Ocean Space, an innovative global hub for investigative installations, performances, workshops, and research developed by TBA21–Academy with partner organisations in the arts, sciences, and policy from around the world. The first half of 2019 also sees Joan Jonas present the latest version of Moving Off the Land, a continuously evolving live performance originally commissioned, developed, and performed as part of a TBA21–Academy Convening. Other key initiatives include a six-week residency by artist Claudia Comte at the Alligator Head Foundation in Jamaica that will weave together scientific and artistic research in compelling new ways, as well as new research and expeditions as part of the second cycle of the Academy’s fellowship program The Current with curator Chus Martínez and artist collective SUPERFLEX.

“2019 will be a landmark year for TBA21–Academy and the expanded community of artists, scientists, policy makers, and researchers invested in the well-being of our oceans, as the creative output of eight years of explorations and research come together with the opening of Ocean Space,” said Markus Reymann, Director of TBA21–Academy. “Our nomadic program has championed innovative field research methodologies; provided opportunities to test and advance these findings at the East Portland Fish Sanctuary, managed by the Alligator Head Foundation in Jamaica; and presented new knowledge-systems to the public through interactive workshops and Convenings across the globe. As we continue to rigorously pursue each of these efforts, Ocean Space will provide a hub for oceanic immersion, and a point of exchange and action for global audiences to engage with research and projects emerging from the Academy and its partners.”

Expanded details on TBA21–Academy’s upcoming season, including public programs as well as ongoing research and residencies follow below:

Moving Off the Land. Oceans – Sketches and Notes by Joan Jonas

In conjunction with the U.S. premiere of They Come to Us without a Word, which originally debuted at the U.S. Pavilion during the 2015 Venice Biennale, Joan Jonas presents two live performances of Moving Off the Land. Oceans – Sketches and Notes, a complex and innovative fusion of readings, dance, live drawings, and projections. The work was originally commissioned, developed, and performed at The Current Convening in Kochi, India, in December 2016, and recently performed at the artist’s retrospective at Tate Modern, London. More information about the exhibition and performance is available here.

Convening: The Ocean is On Air

As part of the 2019 COLOMBOSCOPE Festival, TBA21–Academy will hold a one-day Convening that will feature the premiere of the third episode of the video series What is Deep Sea Mining? by Inhabitants, as well as readings, conversations, and performances by Academy leadership and key literary and artistic figures such as artist Julieta Aranda, Venuri Perera, Anoli Perera, novelist Tinashi Doshi, and singer Hania Luthufi. The event will be activated by Julieta Aranda on behalf of Chus Martínez’s Spheric Ocean Expedition and held in collaboration with Natasha Ginwala. The sixth edition of Sri Lanka’s annual multidisciplinary arts festival, Colomboscope 2019 engages with the oceanic frontier through film, music, and performance, investigating marine ecologies, seafaring histories, and creative public access points to the sea amidst planned future expansions of the city.

In conjunction with the presentation of a new site-specific installation at Desert X, SUPERFLEX leads a series of closed and open sessions and presentations to support their forthcoming expedition for The Current and ongoing research project, Deep Sea Minding. A monumental underwater projection in the desert forms one of the key elements of the public presentation, while a smaller group of experts delves into the behavior and characteristics of pink coral during a private workshop. Spread across different sites over two days, the event also facilitates a performative element.

Following decades of careful restoration and renovation, the historic Church of San Lorenzo in Venice is being given a second life as it relaunches as Ocean Space, a new collaborative platform for research, discovery, and innovation supporting ocean stewardship and conservation. Ocean Space opens with a major new installation and research project by artist Joan Jonas focused on the seas, building on the artist’s ongoing work with TBA21–Academy. Curated by Stefani Hessler, the installation include dozens of drawings, mirror sculptures, video installations, and her theater boxes in large scale. TBA21–Academy additionally opens its archives to the public with the first physical presentation of OceanArchive, developed by Etienne Turpin with the support of Andrés Jaque and Office for Political Innovation. The launch of Ocean Space reintegrates the historic church, which has been largely closed to the public for the past 100 years, back within the social and cultural fabric of city. The space will be activated throughout the week of the Venice Art Biennale in May 2019, including a special live performance by Jonas.

Marking its U.S. premiere, Purple by British artist and filmmaker John Akomfrah delves into the topical and complex issues of climate change, rising sea levels, and extreme weather events in the age of the Anthropocene. Immersive and thought-provoking, and set to a hypnotic soundscape, the major, multichannel video installation intersperses hundreds of hours of archival footage with newly shot film, much of which was taken during voyages of Akomfrah’s team with TBA21–Academy throughout French Polynesia in December 2016. Additional details about the exhibition are available here.

In collaboration with Dr. Alex Jordan, Principal Investigator at the Max Planck Institute Department of Collective Behaviour, and Dr. Dayne Buddo, Marine Biologist and CEO of the Alligator Head Foundation, SUPERFLEX begins testing prototypes for new underwater structures developed as part of their ongoing research for The Current. Together, they will assess the conditions needed to install the structures under water, as well as monitor and record how fish react to them. Their residency will be focused on the sea life located in the East Portland Fish Sanctuary, a marine preserve managed by the Alligator Head Foundation, and will also establish and inform the research of a PhD student who is participating on the project. 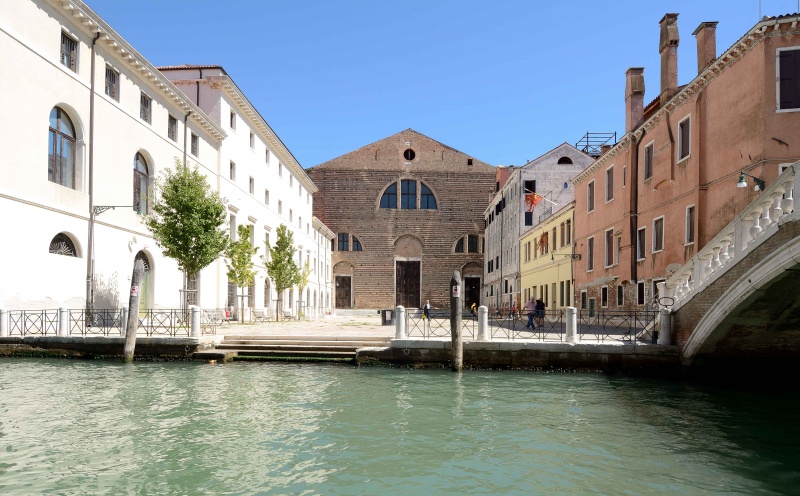