Kansas City, MO. May 1, 2017 – The groundbreaking exhibition Through the Eyes of Picasso will explore Pablo Picasso’s life-long fascination with African and Oceanic art, uniting his paintings and sculpture with art that had a seminal impact on his own creative exploration. The exhibition opens Oct. 20 at The Nelson-Atkins Museum of Art in Kansas City, the only United States venue in a limited tour. Many works in the exhibition will be on view in America for the first time.

Through the Eyes of Picasso also will feature a selection of intimate, personal photographs of the artist at work and play, including images by David Douglas Duncan. The Duncan images were a recent gift to the Nelson-Atkins.

“From his initial encounter with African art in 1907, Picasso’s view of the world was fundamentally altered,” said Julián Zugazagoitia, Menefee D. and Mary Louise Blackwell CEO & Director of the Nelson-Atkins. “He became an avid collector of non-western art and lived with these masterpieces throughout his entire life in his studios. They were a constant source of exploration and inspiration, which manifested itself in the reinvention of his work throughout his career. As a result of that influence, modern art was radically transformed.”

The exhibition will feature 170 works of art, including more than 60 paintings, sculptures, and ceramics by Picasso alongside more than 20 works of African and Oceanic art that were part of his personal collection – pieces that he collected, lived with and kept with him in his studios, many of them featured for the first time in the Americas. Through the Eyes of Picasso also will showcase the works of art – African, Oceanic, and American – that transformed his artistic vision when he encountered them at the Musée d’ Ethnographie du Trocadéro (now in the collections of the Musée du Quai Branly in Paris) during the early part of the 20th century. For Picasso, the power of these masks and sculptures was in the artists’ exploration of line, abstraction of the human body, and its constant transformation.

The exhibition was curated by Yves Le Fur of Quai Branly, in partnership with Musée national Picasso-Paris. Zugazagoitia is organizing and adapting Through the Eyes of Picasso for the Nelson-Atkins. The exhibition is now open at Musée du Quai Branly in Paris through July 23, 2017, will be on view at the Nelson-Atkins from Oct. 20 to April 8, 2018, and in Montreal from May 7 to Sept. 16, 2018.

“Organizing this exhibition with Musée du Quai Branly allows us to see many of the masterpieces that Picasso saw as a young artist,” Zugazagoitia said. “Virtually all the works in the show come from our collaboration with Quai Branly, the Musée national Picasso-Paris, and Picasso family members.”

Picasso was a gifted artist who, as a child prodigy, mastered representation in the classic sense. While he did not formally study the African, Oceanic or American cultures, his encounters with non-western art influenced him tremendously and allowed him to free himself from western traditions and reinvent modern art, despite the fact that he never left Europe.

“He was working inside the tension that existed between the Classicism in which he was trained as a child and the abstraction and directness he saw in African art,” said Zugazagoitia. “He was seeking the ‘essence’ of art, which he felt in the iconic status of those works. Seeing his art side by side with the richness and complexities of African art will be a revelatory moment for our visitors.”

At the Nelson-Atkins, the exhibition will be celebrated with special events and programming. A fully illustrated catalogue will be produced by Musée du Quai Branly and will serve as a lasting legacy of this important project.

The exhibition was conceived by musée du quai Branly – Jacques Chirac in partnership with Musée national Picasso-Paris and adapted by The Nelson-Atkins Museum of Art and The Montreal Museum of Fine Art/Musée des beaux-arts de Montréal. 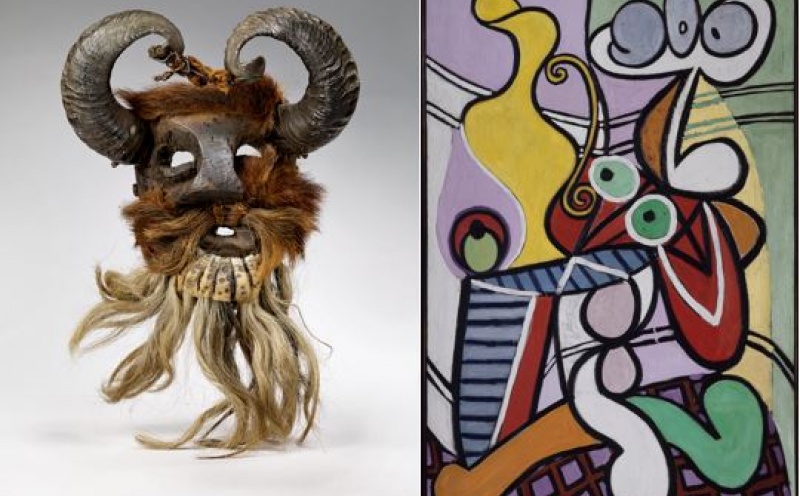