Kiefer Rodin Opening to commemorate the centennial of Rodin’s death

To mark the centennial of Auguste Rodin’s death on November 17, the Barnes Foundation will host the only US presentation of Kiefer Rodin, a major exhibition organized in collaboration with the Musée Rodin in Paris. On view in the Roberts Gallery through March 12, 2018, the exhibition features recent works by renowned contemporary artist Anselm Kiefer that offer a new way of observing and understanding Rodin—alongside works by Rodin, some on view in the US for the first time.

Kiefer Rodin is sponsored by Morgan Stanley. The contributing sponsor is Comcast NBCUniversal.

“Echoed in Kiefer Rodin is Dr. Albert C. Barnes’s belief in the ‘continuity of great art throughout the ages,’ ” says Sylvie Patry, co-curator of the exhibition. “Dr. Barnes viewed artistic expression as an endless conversation between works of different times and places: he collected the work of contemporary artists of his time and hung them alongside African sculptures, Old Master paintings, and Navajo textiles to highlight connections and influences among disparate works of art.

“We continue this tradition today by engaging contemporary artists,” Patry says. “In Kiefer Rodin, the relationship between the work of Anselm Kiefer and Auguste Rodin is fascinating, as is the synergy between their artistic practices and philosophies. Although separated by 100 years, the two artists participate in a dynamic exchange. Kiefer has defined his role in this project as being a ‘wanderer between worlds.’ ”

The exhibition brings together over 100 works, including several large-scale illustrated books by Kiefer (b. 1945) made in homage to Rodin (1840–1917) from materials like plaster; a series of large paintings titled Cathedral Towers; and vitrines filled with assorted objects including molds, dried plants, stones, and pieces of fabric. Also included are sculptures and drawings by Rodin, including rarely displayed plasters.

The works by Kiefer were created specifically for the exhibition in response to sculptures and drawings by Rodin, and catalyzed by the artist’s first encounter with the vastness of Rodin’s oeuvre. In 2013, Kiefer visited the Musée Rodin’s expansive storerooms—home to the artist’s many plaster casts and abattis (sculpture fragments of arms, legs, and heads)—where he was struck by Rodin’s erotically charged drawings and by Cathedrals of France (1914), the only book ever written by the artist. These discoveries were revelatory for Kiefer and introduced him to Rodin’s shared fascination with architecture and ruins as a representation of humanity, as well as his shared approach to art as a constant process of reconfiguring, assembling, and disassembling.

Inspired by Rodin’s plaster casts, abbatis, and sculpture molds, Kiefer appropriated offshoots from Rodin’s work and arranged them with other elements and materials in vitrines. Featured in this exhibition are nearly 20 such vitrines created in 2016, including Dimanche des rameaux (Palm Sunday)and Die Walküren.

In his typical process, Kiefer saturates his material with pigments. In the 4 large-scale paintings featured in this exhibition, including Auguste Rodin: Les Cathédrales de France and A. R. A. K., the layers are broken up and areas of thickness are worked and worked again with earth-toned materials.

Featured in the exhibition will be 17 drawings and watercolors by Rodin, as well as sketchbooks. Rodin’s quick unbroken lines are evident, especially in his rendering of the female body, and every detail is imbued with sensuality.

Crouching Woman (1906-1908), Meditation without arms (after 1900), Torso of a Young Woman with Arched Back (1909): these masterpieces demonstrate Rodin’s experimental nature in large-format plaster sculptures and convey his sensual depiction of the female body through raw, fragmented forms.

Also featured in the exhibition are assemblages from Rodin’s studio, including a selection of small sculptures in which Rodin brings together, sometimes playfully, molds from his previous creations, antiques, and discarded materials. These imaginative and surprising combinations create lively, unusual works and introduce the viewer to the intimacy of the artist’s studio.

Central to Kiefer’s artistic practice is the notion of life and art as an endless continuum. Similar to Rodin’s approach to artmaking, Kiefer constantly experiments with different combinations of forms, explores variations on the same theme, and uses diverse, unexpected materials. Both Rodin and Kiefer establish an analogy between architecture—specifically gothic cathedrals—and the human body in their work. Rooted in experimentation, both Kiefer and Rodin’s artistic processes convey a poignant vision of humanity’s spiritual dilemma and our relationship to history. In this exhibition, the contrast of Rodin’s work with Kiefer’s emphasizes Rodin’s modernity and his proximity to contemporary practice.

Philadelphia played an important role in the appreciation of Rodin’s work. His first US exhibition was presented at the Centennial International Exhibition in 1876, and the Pennsylvania Academy of the Fine Arts brought Rodin’s drawings to the attention of its students in 1905. The Barnes Collection is home to many important works by Rodin’s contemporaries and friends such as Pierre-Auguste Renoir, Paul Cézanne, Claude Monet, and Georges Seurat. Rodin also had a profound influence on the watercolors of American artist Charles Demuth—40 of which hang in the Barnes collection.

Kiefer Rodin coincides with the Barnes Foundation’s fifth anniversary on the Benjamin Franklin Parkway in Philadelphia. This exhibition, along with many works on view at the Rodin Museum,located directly next to the Barnes on the Parkway, offers an unprecedented, in-depth exploration of Rodin and an opportunity to see the largest gathering of the artist’s work in the US. Kiefer Rodin is part of a worldwide series of major Rodin projects taking place in 2017 commemorating the centennial of the artist’s death and unified through the hashtag #Rodin100.

Kiefer Rodin is accompanied by a fully illustrated catalogue, published by the Barnes Foundation, the Musée Rodin, and Gallimard.

Kiefer Rodin is a curatorial collaboration between Sylvie Patry, consulting curator at the Barnes Foundation and deputy director for curatorial affairs and collections at the Musée d’Orsay, and a team of curators at the Musée Rodin: Catherine Chevillot, director, and Véronique Mattiussi, in charge of the Rodin archives, with the collaboration of Sophie Biass-Fabiani and Hélène Marraud. 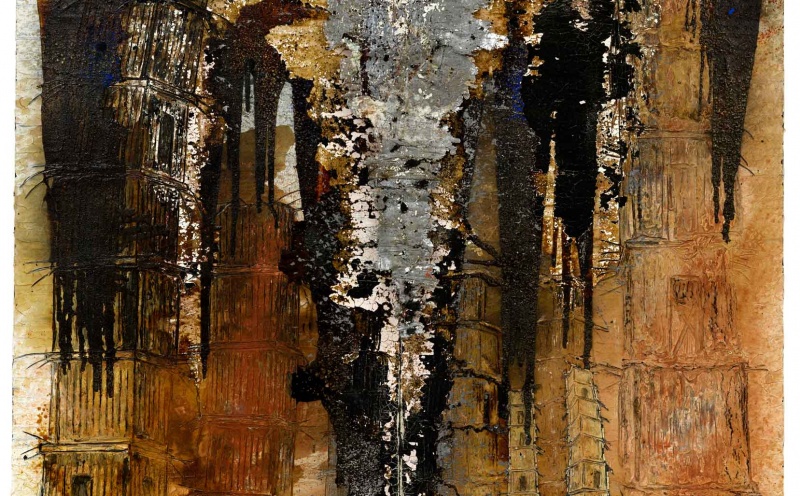