The Frick Collection announced today that it is entering into the next phase of planning for the upgrade and enhancement of its facility, which encompasses a constellation of buildings, wings, and additions constructed between 1914 and 2011. Following the withdrawal of the 2014 design proposal and a subsequent period of extensive study, Frick leadership has developed a new approach to upgrading and expanding its facilities that enhances opportunities for intimate engagement with great works of art and preserves the Frick’s gardens. The ongoing planning includes the creation of new exhibition, programming, and conservation spaces within the institution’s built footprint.

As the next step in this process, the Frick is issuing a request for qualifications (RFQ) to select architectural firms, which are being invited to submit their credentials based on their relevant experience and expertise. The institution is planning to announce a finalist later this year and will work together with the selected architect to further define the expansion program, with initial designs expected to be unveiled in 2017.

Home to one of the world’s leading collections of fine and decorative arts, The Frick Collection is noted for the contemplative atmosphere of its galleries, which were previously the principal rooms of the private residence of Henry Clay Frick. It also houses the Frick Art Reference Library, one of the top five art historical research centers in the world. Although its collections, attendance, and public programs have grown significantly over the past decades, the Frick’s facilities have not undergone a significant upgrade since the 1970s. Many of the Frick’s critical functions are currently constrained—from the presentation, care, and conservation of its collections, to education programs and basic visitor services—having been retrofitted into spaces in and adjacent to the former residence.

The project will open to the public—for the first time—new areas of the historic Frick home, reorganize and upgrade existing spaces in the Frick’s buildings, and renovate underground facilities. It will create a more natural flow for visitors throughout the buildings, while enhancing and upgrading the behind-the-scenes facilities to enable professional staff to work more efficiently and effectively. At the same time, the expansion will preserve the distinctively residential character and intimate scale of the house and its gardens, both those original to the residence and in more recent additions.

“We enter the next phase of our expansion process energized by the promise of an enhanced facility that will address the Frick’s urgent programmatic and museological needs, while ensuring that the institution will continue to do what it does best—provide intimate encounters with exceptional artworks in spaces designed for tranquil contemplation,” said Dr. Ian Wardropper, Director of The Frick Collection. “We look forward to developing a design that advances these goals and reflects our passion for preserving the unique character and qualities that define the Frick experience.”

The project will include:

Further details on the enhancement and expansion plan, including square footage and project cost, will be determined together with the architectural team that is selected.

Originally constructed in 1913–14 by Carrère and Hastings, the Frick house has been expanded several times in response to the growth of its collections and the needs of the public. In the 1930s, architect John Russell Pope undertook the conversion of the family home into a public museum, nearly doubling its original size, and demolishing the adjoining library building that had been added in 1924 in order to construct a larger library to accommodate its growing collections. An additional expansion occurred in 1977, which included the creation of the 70th Street Garden. In 2011, the Portico Gallery was created by enclosing an existing loggia. 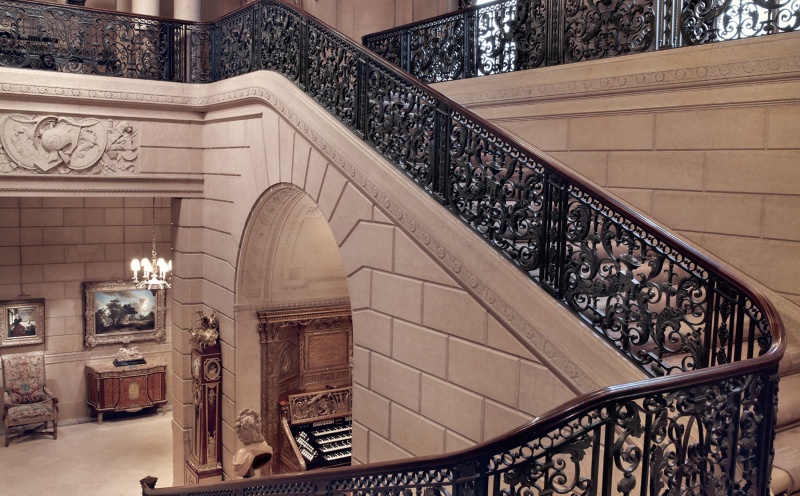