The High will be the first U.S. museum to present a new body of work by celebrated German artist Thomas Struth in the touring exhibition “Thomas Struth: Nature & Politics” (Oct. 16, 2016, through Jan. 8, 2017), which is co-organized by the High, the Museum Folkwang (Essen, Germany), and Martin-Gropius-Bau (Berlin), in collaboration with the Saint Louis Art Museum.

Struth is renowned for his innovations in large-scale color photography that span subjects including cityscapes, architecture, portraits, landscapes, museums and technology systems. “Nature & Politics” will combine various strands of Struth’s oeuvre in the more than 30 works on view—placing particular focus on technology and the manufactured landscape as overarching themes. The works are global in nature, drawn from Struth’s travels in Europe, the Middle East, Asia and America over the past 10 years, and they include three photographs made in Atlanta in 2013.

“Struth’s work is striking both for its scale and complexity,” said Brett Abbott, Keough Family curator of photography at the High Museum of Art. “Presenting this new work by Struth aligns with the High’s ongoing commitment to exhibit some of the most important contemporary photographers working in the field today. This exhibition will resonate particularly well with our audiences because it also features photographs that Struth created right here in our Atlanta community.”

“Nature & Politics” will feature works that examine how human ambition and imagination physically manifest in the highly complex constructions that shape our world. Many of the photographs record the structural complexities of remote techno-industrial and scientific research spaces, such as physics institutes, pharmaceutical plants, space stations, dockyards, nuclear facilities and other edifices of technological production. These photographs uncover sites of scientific development—typically kept from public view—where the heights of human knowledge are enacted, debated and advanced. Struth’s images also reveal the layers of politics and the influences of the past and present often found in human-crafted environments.

The works on display will include a series of panoramic views of Disneyland that Struth produced to examine the constructed imagination—in this case how Walt Disney’s memories of Europe were manifested in a fantastic yet physical reality. Also featured are images of the contested landscape of Israel and the West Bank, one of Struth’s most recent projects.

The Atlanta works in the exhibition include a photograph from the High’s permanent collection that Struth captured in the Georgia Aquarium. The monumental print, depicting a group of adults and children set against the background of a tank of underwater sea creatures, allows the viewer to feel a part of the scene and emphasizes the wonders of scientific advances and their effect on the way we experience the world. A second photograph depicts a robotics workroom at the Georgia Institute of Technology’s Institute for Robotics and Intelligent Machines.

Additional works on view will include:

The exhibition is curated by Museum Folkwang Director Tobia Bezzola and Brett Abbott. 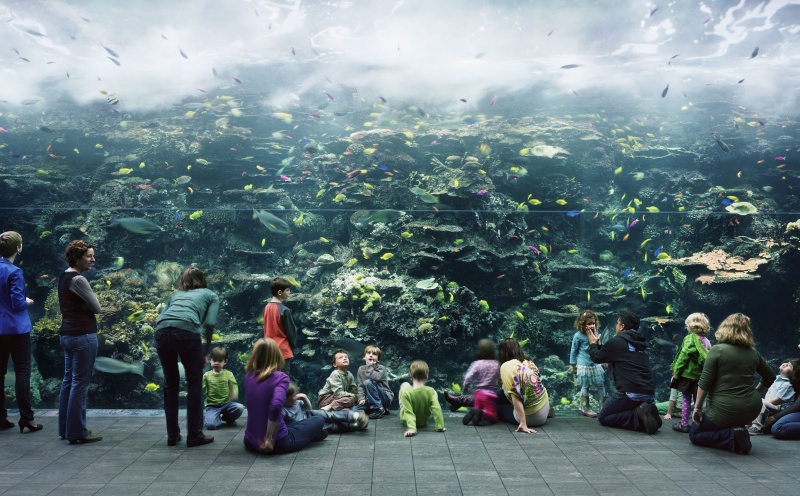