In City in the Grass Drew will create a conceptual city within the park, inviting visitors to engage from above and within its structures

Madison Square Park Conservancy today announced that Leonardo Drew has been commissioned to create a new site-specific installation for the Park next spring. Marking the Conservancy’s 38th commissioned exhibition and the artist’s first major public art project, City in the Grass will present a topographical view of an abstract cityscape atop a patterned panorama. Building on the artist’s signature technique of assemblage and additive collage, the 100-foot long installation will be Drew’s largest and most ambitious work to date, incorporating new materials and a new conceptual premise. City in the Grass will be on view from June 3, 2019, through December 15, 2019, at the Park’s Oval Lawn.

"In this teeming urban space, Leonardo Drew's goal has been to bring people close in to his work, to study the swells and folds of his cityscape and to locate a personal place within the purposeful voids in the work," said Brooke Kamin Rapaport, exhibition curator and Deputy Director and Martin Friedman Senior Curator of Madison Square Park Conservancy. "This is a symbolic and literal multilayered project. The artist builds layer on layer of materials while using the metaphor of a torn carpet as a complicated reference to home, comfort, and sanctuary. Viewers can look down onto City in the Grass as if they are giants assessing a terrain; upon sitting along the Oval Lawn's green expanse, they will be able to embed themselves within the fabric of the sculpture."

For City in the Grass, Drew has conceived of an expansive aluminum structure that will undulate along the Park’s lawn following its subtle slopes and valleys. Meticulously layered with a mixture of multicolored sand and dirt, the structure will mimic a patterned carpet as its coarse, decorative surface gathers and folds, reflecting the artist’s interest in East Asian decorative traditions and global design more broadly. In various sections the artist will install wood reliefs emerging from the lawn, reminiscent of aerial views of protruding cityscapes.

Celebrated for his assemblage reliefs that push the frontiers of collage, Drew composes his work with three-dimensional clarity and a symbolic logic. City in the Grass, the artist’s first horizontally oriented work, will follow his practice of using what he refers to as “new stuff.” While his treatment of materials—which often includes techniques like burning, oxidizing, and weathering—evokes found objects, Drew chooses to work with new materials that provide him with complete control of his material choices and compositional form.

Added the Conservancy’s Executive Director Keats Myer, “We look forward to welcoming Leonardo Drew’s City in the Grass next summer to our Oval Lawn. Through this monumental, interactive, and visually dynamic work, Drew will encourage visitors to consider and celebrate their relationships to the cities they inhabit and explore, and the agency that each individual possesses in their making.”

Leonardo Drew is a New York-based artist known for his unique manipulation of natural materials and creation of additive sculptures and installations that address issues at the intersection of human physical and social experience. Recent solo museum exhibitions include shows at SCAD Museum of Art at the Savannah College of Art and Design (2013); Beeler Gallery at the Columbus College of Art & Design (2013); Palazzo DellePapesse, Centro Arte Contemporanea, Siena, Italy (2006); Royal Hibernian Academy, Dublin, Ireland (2001); and the Hirshhorn Museum and Sculpture Garden, Washington DC (2000). Drew’s mid-career survey, Existed, premiered at the Blaffer Gallery at the University of Houston in 2009. The exhibition went on to the Weatherspoon Art Museum in Greensboro, NC, and the DeCordova Museum and Sculpture Park in Lincoln, MA.

Drew’s work is included in numerous public and private collections. Public collections include the Metropolitan Museum of Art, New York; Museum of Contemporary Art, Los Angeles; Hirshhorn Museum and Sculpture Garden, Washington, DC; and Tate, London. He has collaborated with the Merce Cunningham Dance Company, and has participated in artist residencies at ArtPace, San Antonio and The Studio Museum in Harlem, New York, among others. In 2011 he was awarded the prestigious Joyce Alexander Wein Artist Prize presented by The Studio Museum in Harlem.

Drew was born in 1961 in Tallahassee, Florida, and grew up in Bridgeport, Connecticut. His talent and passion for art was recognized at an early age, and he first exhibited his work at the age of thirteen. He attended the Parsons School of Design and received his BFA from the Cooper Union for the Advancement of Science and Art in 1985. He currently lives and works in Brooklyn, NY. 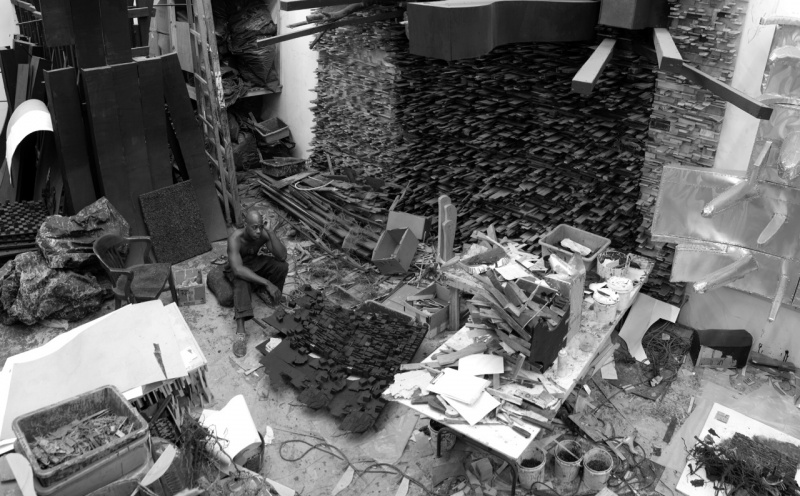 Other news about Madison Square Park Conservancy and 2019 U.S. Pavilion