When the Vancouver Public Library opened in 1995, its “urban room” set libraries on a trajectory of incorporating grand public spaces, however it was an incomplete vision. On Saturday, 29 September, the public will at last have the chance to access the roof garden at the 10th level of the library.

Working with the Vancouver Public Library, Moshe Safdie, the internationally renowned architect of the original 1995 building, conceived of a sky-lit double-height atrium with a grand stair leading the public from level 8 to level 9 to the roof garden.

“We are delighted that after 23 years, the original concept of an accessible rooftop garden is being delivered to the public,” said Moshe Safdie, from his office in Somerville, Massachusetts. “We compliment the Library Board and the City of Vancouver for their perseverance and gathering the resources together to make this long-awaited vision a reality.”

“The public has embraced the library as one of the most important civic spaces in the city,” Safdie added. Now, this expansion of the library adds an important, public amenity for Vancouver. It is truly a place for people to come together.”

The Vancouver Library Square building occupies an entire city block of downtown Vancouver.  The upper two floors were leased to the provincial government for 20 years as part of the financing for the building.  When this lease expired, the upper two-stories were able to be reclaimed to expand library functions—a grand stair and seating feature which can be used for lectures, receptions, and other gatherings, as well as a new reading room, staff offices, and a board room.  Multi-purpose rooms, an auditorium and a series of display areas afford those visiting the library the opportunity to study and explore Vancouver’s rich history.

At Level 9, nearly one third of the existing building enclosure was removed to make way for a thoroughly landscaped garden terrace with panoramic views of the city skyline. This garden is open to the public for daily use and can be reserved for special events. The noted Canadian landscape architect Cornelia Hahn Oberlander conceived of both the original roof garden and the expanded public roof garden. She has designed such iconic public spaces such as Robson Square in Vancouver and the gardens of the National Gallery of Canada in Ottawa.

The remaining interior spaces at Level 9 feature general meeting and event rooms for public use that benefit from the visual transparency between indoors and outdoors.

During the day, when the library is open, the new floors are seamlessly integrated with the rest of the library by extending the existing elevators and escalators up to the upper floors.  In the evening or when the library is closed, the upper two floors can be accessed by way of the private elevator bank at the ground level plaza, which connects directly up to these floors. 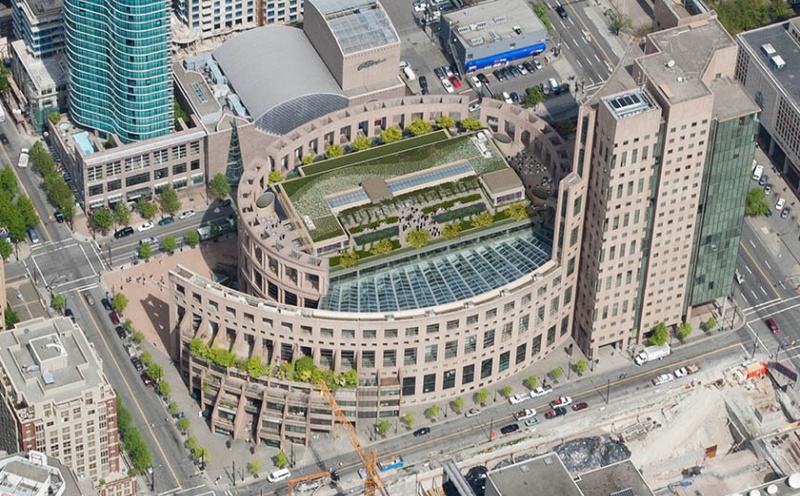